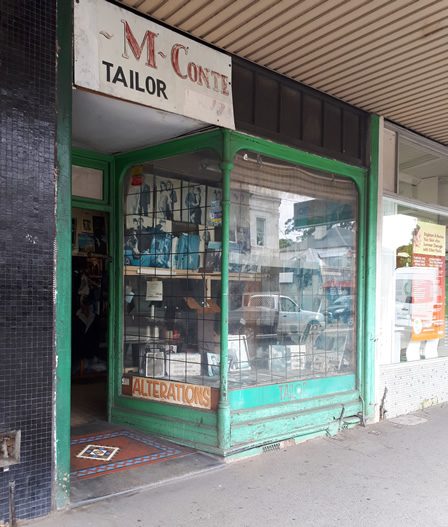 In my teenage years, as I became increasingly obsessed with ska and reggae, punk, skinhead and mod, I spent as much time reading about the history and fashion of subcultures as I did listening to the music.  Thankfully it could be done simultaneously. The information was becoming increasingly available because of the internet’s growth and websites dedicated to showcasing the subcultures were not uncommon, but for someone who didn’t have two cents to rub together, the clothes were out of reach.  Levi’s were received as presents from relatives returning from the US and any shirt with a button-down collar would do. Doc Martens could be justified as replacements for school shoes. A Fred Perry polo was not a staple at the youth centre of the coastal coal town of Wollongong. We weren’t poor – it was just hard to come by – and I don’t ever remember feeling like I was missing out on anything because no-one my age was in a better position than I was.  I do remember being obsessed with trying to track down the perfect pork-pie or trilby, which lasted for far too many years, but the clothes just weren’t easily available – there wasn’t a shop to plan a visit to in Sydney and no-one was running a world-wide mail-order service, that we could contemplate using, at least.

As I started to spend more time in Sydney and earn enough money to move out of home, the circles I moved in became more diverse, particularly in respect to age.  I began mixing with people who could afford to travel and buy clothes while they were overseas or were still wearing clothes they’d bought during Sydney’s mod and ska heyday in the 1980s.  Some were even wearing tailored suits and I remember the beginning of a fixation (resolute determination?) when I found out that the Italian tailor who had suited many of Sydney’s mods in the 80s was still in operation, and within spitting distance of where I was living.  A Saville Row suit was out of the question, but a Mario Conte suit was something I had to have.

Entering Conte’s shop at the City of King Street, Newtown for the first time was an intimidating experience.  This was a shop from another era – it was and remains, a time-warp. It wasn’t intimidating in the Seinfeld Soup Nazi sense of the word – I had no prior knowledge of Conte’s personality – but I felt the pressure I  placed on myself to convey what I wanted well enough so that I’d end up with what was clearly defined in my imagination.

The northern end of King St where Conte’s shop is located is a rather unassuming section of the popular high street.  It’s close to the University of Sydney, but it continues to struggle to fend off the tide from the uni and Moore College where others haven’t (I’m not sure how the relocation of Gould’s book arcade fits with this narrative, but moving on).  There’s a Domino’s pizza, but there’s also a Nepalese restaurant that no longer seems opens and a large paper shop opposite. The shop itself has absorbed decades of car pollution and the sign on the awning telling you what is inside has been halved.  I’d always thought that at one point, Conte must have had a business partner, but the excellent piece by Black (2016) corrected my thinking – removing the words Sartori and Continental was Conte staying with the times as his clientelle shifted away from the Greeks and Italians of earlier decades.

I first went with my close mate, Torrin, and we must have talked to people or he knew about the fact that you really had to hunt down your own fabric.  At this stage, Newtown still had textile shops so we headed to Alice Street and I picked this lovely blue-grey mohair wool blend and Torrin picked a shade of charcoal.  I remember, in a sort of blend across different visits, Conte being surprised to hear how little I’d paid for the fabric I’d brought him. To this day, if you asked Conte to supply the fabric you could get really cheap fabric or Dormeuil 100% mohair at a premium.  There was nothing in between (although Black’s article suggests that wasn’t always the case). It’s worth noting here that Conte’s prices changed very little if at all over the years and the labour element of the price was ridiculously low. So while it would have made the Dormeuil within reach because you weren’t paying much for Mario to make the suit, it just didn’t seem right to spend so much more on the fabric than the crafting of it, particularly as he wasn’t making any money selling the fabric.  And there are bargains to be had for quality fabric around the place (mainly on the web) if you’re willing to seek it out.

Inside the shop, you are greeted by sparse arrangements of menswear items – some of which hadn’t been collected by customers after being made or altered, others having been bought wholesale by Mario many years ago to sell, leaving only a mix of sizes and styles.  Without fail, I’ll look around as I wait for Mario to appear, hoping I’ll spot something I’ve not seen before, but for the most part the ties are too wide and the shoes too large. I once tried squeezing into a pair of smart tonic trousers that were hanging in the front window, visibly too small for me but with a price so low I convinced myself that the discomfort  that came with a permanent inhalation of breath would be a worthy sacrifice. Thankfully I talked myself out of them and back in the window they went.

Black’s article points out that prior to Conte leasing the building in 1966 (he bought it shortly after), the ground floor was a barber shop, and now that I know, it makes sense, given its size and layout.  The front room is quite small, but functional: there are a small number of rolls of fabric on one side and racks on the other holding customers clothing for collection. An old sewing machine no longer in use sits on a small able and there’s a single chair for customers to sit and take off their shoes.  At the back of this small room is a bench that Mario and the customer stand on either side of. Beyond this bench, and accessed from the left end of it, is another small fitting room, with a mirror at one end and a stash of other old sewing machines. A small corridor to the left of the dressing room leads to where Mario works.  This room has a semi-translucent wall that allows him to see when a customer enters. I’ve often thought about how annoying it would be to be interrupted in the middle of measuring, cutting or sewing every time a customer walked in. But that’s what you have to live with when you’re running a one-man show, I guess.

Someone recently said to me that you’ve got to be hard on Conte to make sure you get what you want and to an extent I agree.  I’ve talked to him about mods, but it struck that while he knew exactly what I was talking about, Sydney’s changing nature didn’t ever allow him to see his business so narrowly.  Or perhaps they heyday of this style of fashion was so long ago he’d needed to take a much more pragmatic approach to his business. The last time I saw him he commented that he rarely made suits anymore.  And when I commented that his trouser price hadn’t changed in over a decade, he made the point that you could buy a pair of trousers off-the-rack for a lot less than he was charging. Such an observation makes you conscious of the fact that very few people have the same mentality towards clothes as those of us who seek individuality without being able to just throw money around.  It makes one think about the age of tailors and how few there are around. The affordable tailored suit is likely to be a thing of the past before too long.

The last suit I had made by Conte was earlier this year – a versatile charcoal suit made of Dormeuil fabric, sourced from Britain – and while I enjoyed all the usual aspects of the process, including thinking about ticket pockets and trouser length, what I enjoyed most was him digging out the original measurements on a slip of paper stapled to others from subsequent suits made not only for me but for friends of mine.  If you went to a new business now and they used this system you’d question whether they’d be around another month, but here was a system that had worked for Mario since 1966 and it was still doing the job. And so too was Conte, crafting unique fitted garments for those of us that love to connect with the people who make our clothes.

If you’ve gotten to the end of this spiel, but not clicked through, make sure you check out Dr Prudence Black’s research article on Conte and Newtown’s early rag trade from 2016, which is fascinating!