Black Ivy: A revolt in style

Black Ivy charts a period in American history when Black men across the country adopted clothing seen by many as the preserve of a privileged elite – and made it their own. From the Oxford button-down shirt, the soft shoulder three-button jacket and the perennial military repp tie, these clothes are instilled with an approach so revolutionary that you’ll never be able to see them in the same way again. This is a story about clothes, but also about freedom.

Scroll down for further description.

Black Ivy: A revolt in style charts a period in American history when Black men across the country adopted clothing seen by many as the preserve of the privileged elite and made it their own.  From the Oxford button-down shirt, the hand-stitched loafer, the soft should three-button jacket, and the perennial military repp tie – these otherwise conventional clothes are instilled with an approach so revolutionary that you’ll never be able to see them in the same way again.

It’s a story about clothes, but it’s also a story about freedom – both individual and collective.  It’s a story about a generation of people challenging the status quo, struggling for racial equality and civil rights. From the most avant-garde jazz musicians, visual artists, and poets to the most influential architects, philosophers, political leaders and writers, Black Ivy explores, for the first time ever, the major role this particular style of clothing played during this period of aspiration and upheaval and what these clothes said about the people who wore them.

Boasting the work of some of America’s finest photographers and imagemakers, Black Ivy looks at how a generation of men took the Ivy look and made it subversive, edgy, cool and unpredictable in ways that continue to impact menswear to this day. 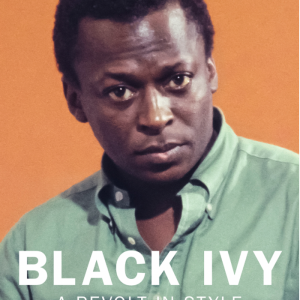 You're viewing: Black Ivy: A revolt in style $84.00
Add to cart
We use cookies on our website to give you the most relevant experience by remembering your preferences and repeat visits. By clicking “Accept All”, you consent to the use of ALL the cookies. However, you may visit "Cookie Settings" to provide a controlled consent. You should also refer to our privacy policy for details on use of third party services, including recaptcha.
Cookie SettingsAccept All
Manage consent